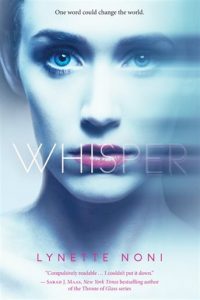 For two and a half years, Subject 684 — “Jane Doe” — has been locked underground in a secret government facility, enduring tests and torture. In that time, she hasn’t uttered a single word. Not even her real name. Jane chooses to remain silent rather than risk losing control over the power within her. She alone knows what havoc her words can cause. Then the authorities put her in the care of the mysterious Landon Ward, and Jane is surprised when he treats her like a person rather than a prisoner. Ward’s protective nature causes her resolve to crack in spite of her best efforts to resist. Just as Jane begins to trust him, though, a freak accident reveals the dangerous power she has concealed for years. It also reveals that the government has been keeping secrets of its own. Now Jane’s ability is at the heart of a sinister plot for vengeance, and she has to decide whom she will trust … and whom she will help.

Hey GBC! This month’s book is Whisper by Lynette Noni. The book is written from the point of view of “Jane Doe”, a girl who is locked in a secret facility, and who won’t speak a word. When she is put in the care of a man called Landon Ward, she expects the worst, but instead she is treated kindly. Jane starts to crack in the face of people who seem to care about her, when a close call reveals that she has an ability to speak things into being. I thought Whisper was an amazing book, but it started out fairly slow. I would recommend this book for 12-15 year olds because some of it deals with corruption in our world and blurred moral lines.