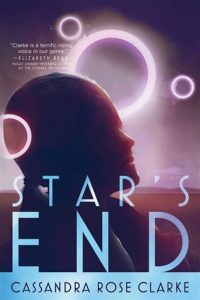 Esme Coromina has always known that one day she would run the Four Sisters, the small planet system that her father grew into a corporate empire. Raised as the pampered heir to the company, Esme lived the best years of her life at Star’s End, the estate her father built on the terraformed moon where he began his empire. In the tropical sunlight and lush gardens, Esme helped raise her three motherless half-sisters. But as Esme is groomed to take over the family business of manufacturing weapons for the mercenary groups spread across the galaxy, she slowly uncovers the sinister truth at the heart of her father’s company. And when those secrets are finally revealed, Esme is sure that she’s lost her sisters—and part of her soul—for good.

Now, after a lifetime of following her father’s orders, Esme has a second chance. For the first time, Esme is making her own decisions, and the impact of her decisions will reverberate throughout the Four Sisters. As Esme struggles to assemble her estranged sisters for one last goodbye with their dying father, she has to choose whether she wants to follow in her father’s footsteps—or blaze a daring new path.

Hey GGC! Happy New Year! This month’s book is called Star’s End, by Cassandra Rose Clarke. It takes place in a futuristic time where humans have spread far across the galaxy, and the main character (Esme) is the heiress to a huge, very successful weapons company. We watch as she learns more about secret projects and begins to have doubts about how honest the business really is. Star’s End is dramatic and mysterious, full of flashbacks, and how vital information in the story is revealed makes it seem like you and Esme are experiencing the same feelings. Be warned though, the characters of Star’s End use a bit of profanity, so I wouldn’t recommend the book if you are under 13.
Happy Reading!