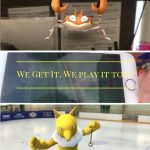 Pokestops, Pokeballs, Pokecoins, Gyms, all the buzz words of the summer. Just about everyone’s at least heard of the game if you aren’t already playing it… Pokemon Go. We get it, we’re having fun playing it too. Yup this app has gotten the attention of everyone young and old… NO, we are not OLD, but we do like to have fun and stay safe. This new reality based game has caught the attention of everyone around the globe. Young, old, we’re all playing it and loving it! But before you get too caught up playing the game there are some safety concerns surrounding it.

We don’t need to tell you how to play the game or what the buzz words about the game are but we would like to take a minute and just give you some food for thought as you walk around your community playing the game.

One of the things that we are liking about this game is it is getting everyone outside and moving. You can’t play if you don’t walk around your community. However, this can also be a safety concern as people are tossing safety to the side as they leap over fences, cross roads, trespassing, and heading into rivers and streams all to catch a Pokemon. If you are playing this game you really need to be paying attention to your surroundings. It’s very important if you are playing that you discuss community boundaries with your parents. How comfortable are they with how far you can go alone in your community? Are you allowed to cross the street, should you be going into someone’s backyard. These things all seem like common sense and you’re probably saying Yeah, yeah, we know but when the excitement of the game kicks in are you really paying attention. Yup it happens, I watched a teen walk into a fence last night trying to capture the creature as his friends all stood by and laughed.

On a positive note it is a great way to get to know the people in your community. Players are all calling out and chatting to one another about where the Pokestops are, which characters are around from young to old, everyone is talking. It’s great to know the people in your community, however safety concerns about stranger danger and wandering off with someone to go catch another Pokemon character should be considered. It goes back to that old saying, “never take candy from a stranger” your parents talked to you about when you were younger. Never get into someone’s car that you don’t know. Now we need to add in NEVER go off with a stranger no matter how rare, or how many Pokemon characters they are saying are just around the corner. Remember all those street safety and stranger danger conversations you had with you parents or at school, now you need to recall those discussions and put them into action. We want to see the good in people however, strangers could have their own agenda and be trying to influence you to go with them to find more Pokemon. We can’t stress enough the importance of NOT going off with a stranger.

Once you’ve captured your Pokemon you can snap a picture of it in real life situations that as we are seeing are then being shared on all sorts of other social platforms. We know how fun is it to show that Pokemon creature at sitting on your Frappe cup or at the hockey rink, but this too is a safety concern. The game is fun to play but we do encourage you to take a minute before you share pictures of you with your captured creature and really look at the picture, what personal information is in the background of where the character has appeared that would then give clues or identifying information for others to see as to your whereabouts. Remember what happens online stays online, do you really want everyone knowing where you are and the community you are living in? Remember Pokestops and Pokegyms are often found at public, commmunity places so lots of personal information can be taken from posting if you are at the local community library or community centre. You are giving identity to your community whereabouts.

Pokemon Go is another great opportunity for you to be a digital leader and talk to your parents about it. Ask them about community boundaries how far can you go, talk to them about data uses as the last thing your parents want is a huge bill because you went over your limit. If they aren’t sure if they really want you to be playing the game, ask your parents to try downloading it on their phone and playing it with them. That way you can be out enjoying time together and get a good understanding for how the game actually works while playing. Take the opportunity to talk with them about some of the safety concerns surrounding the game that we’ve discussed.
As always have fun, be #SociallySafe and happy Pokemon hunting.

Once you have downloaded the app to play you create your own user name… be aware this is becoming harder than it sounds as so many people have downloaded their names and favourite sports etc it is hard to find a unique name. However, we do actually like this as it is making you get creative with your usernames and not use personal information. Another thing to note when you are setting up usernames is that once it is created you cannot change it… that includes spelling mistakes as well. So take your time and come up with a name that is unique to you.