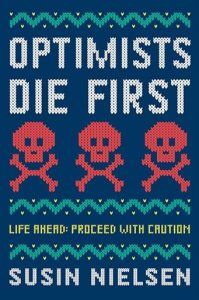 This touching, hilarious tragi-comedy by award-winning author Susin Nielsen proves: Life is out to get you. But so is love. A quirky alternative to the “sick lit” genre for YA readers.

Petula’s funny, and a crafting genius, but no social star at high school, and it doesn’t help that she’s isolated herself after her adored toddler sister died. Petula feels responsible for this death, though her parents say it was a tragic accident. No one’s fault. Now, Petula sees danger everywhere: every activity and every bite of food could kill you. Then a new boy, Jacob, joins Petula’s group in the school’s lame art therapy program; he has a prosthetic arm and darkness behind his sunny surface. Petula and Jacob become friends, then, something more. But a secret behind why he’s in the group could derail them.

Hey GBC! This month’s book is called Optimists Die First by Susin Nielsen, and it isn’t as morbid as it seems (but it isn’t exactly cheerful either). It’s about a “troubled” teenaged girl and her group therapy buddies. Petula is an extreme pessimist, and she believes that the worst thing to happen will always happen.

I liked this book because of the humour that was littered on the pages. It is hard to lighten up a bad situation without making it seem inconsequential, but I think Susin did an alright job with it. I recommend this book for 14-16 year olds because it does get pretty heavy and there is some bad language. My only complaint is that the book gets repetitive after a while, but otherwise it’s a good book.